Your Guide to Choosing the Right Incision for Your Breast Augmentation 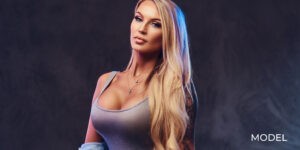 If you have recently decided to move forward and schedule a breast augmentation procedure, you might be wondering what the right incision for your breast implants is.

An incredibly common question and concern among women who plan to undergo a breast enhancement surgery, determining which incision is right for you is nearly just as big of a decision as the procedure itself. The incision can affect everything from scarring and recovery to long-term results and even future breastfeeding opportunities.

To help you get a better understanding of each incision, as well as the procedure itself, we have put together a comprehensive guide on choosing the right incision for your breast augmentation surgery.

What is Breast Augmentation?

Firstly, what is breast augmentation? And what are its benefits? Breast augmentation is a plastic surgery procedure that uses breast implants (either silicone, or saline, or a combination of both) to increase a woman’s breast size, fullness, and elevation while artistically shaping the breast into a natural-looking, beautiful contour.

With the ability to help women achieve the breast size, shape, and contour they have always dreamed of, breast augmentation can help a woman feel more self-confident and secure in her own body.

Not to mention, implant type and shape affect the results you will see after surgery, which is why Dr. Sanders encourages you to learn as much as you can about breast implants. Below, he shares a quick overview on implants that should be helpful as you begin your research into the ideal breast augmentation incision for you, implant options, and more.

Silicone implants are pre-filled with a silicone solution, which is meant to mimic the texture and feel of natural breasts. Many women prefer silicone implants because they offer a more realistic feel and appearance.

However, it is important to note silicone implants often require a slightly larger incision compared to saline implants and are only available to patients 22 and older.

Compared to silicone implants, saline implants offer the advantage of a smaller incision, as they are inserted into the breast and filled with a saline solution through a small tube.

Additionally, saline implants are available in several different sizes (width) and projections (the amount the implant pushes the breast forward), which makes it easy for a plastic surgeon to customize the implant to your unique needs and goals.

In the September 2012 edition of the Aesthetic Surgery Journal, a new implant called the “IDEAL IMPLANT” was featured and quickly received lots of buzz. A unique type of implant, the Ideal Implants are structured saline implants designed to resist folding, wrinkling, sloshing, and collapsing when upright (which is a common flaw associated with traditional saline implants).

Like other saline implants, the Ideal Implant is filled with saltwater and housed in silicone. So what makes it different from traditional saline or silicone implants?

That would be the internal structure that compartmentalizes the saline, reducing folding and wrinkling and giving the breasts a more natural look and feel.
Similar to saline implants, the Ideal Implant requires a smaller incision compared to silicone implants, as these implants are filled with a saline solution when inserted.

When planning your breast augmentation procedure, there are a number of important decisions to make, including incision location and which is ideal for your unique aesthetic goals.

This information will better help you determine which breast augmentation incision is right for your specific anatomy and goals. Let us dive in and look at each incision type individually.

Under the Breast (Inframammary Incision)

The inframammary incision, otherwise known as the breast fold incision, is the most common (and likely the most popular) breast augmentation incision technique used in the United States. In fact, it was the original incision used for breast enhancement procedures and continues to be used as a go-to technique among many plastic surgeons.

Positioned under the breast where the lower part of the breast meets the chest wall, an inframammary incision makes it easy for an experienced plastic surgeon to insert either saline or silicone implants below or above the muscle, as well as find optimal placement for the most natural appearance.

Advantages of the Inframammary Incision:

Disadvantages of the Inframammary Incision:

Around the Nipple (Periareolar Incision)

A periareolar incision, also known as a nipple incision, is made between the areola, which is the darker skin encircling the nipple, and the surrounding skin of the breast. The incision is usually made on the lower half of the areola and from there a breast pocket is created above or underneath the muscle. Once ready, an implant is slid through the incision, moved into the breast pocket, and optimally positioned by the plastic surgeon.

Advantages of the Periareolar Incision:

Disadvantages of the Periareolar Incision:

Under the Armpit (Transaxillary Incision)

The transaxillary incision, which is more commonly known as the under the armpit incision, is an advanced surgical technique that involves creating a careful incision in the armpit’s natural fold. After the incision is made, the plastic surgeon creates a pathway to the breast and a pocket for the breast implants is constructed, where they can either be placed above or below the muscle.

Additionally, the transaxillary incision procedure is most often an endoscopic approach, meaning the incision is remarkably small, typically ranging in length from an inch to an inch and a half. This means the incision can usually be well hidden within the armpit once fully healed.

Advantages of the Transaxillary Incision:

Disadvantages of the Transaxillary Incision:

Through the Belly Button (Umbilical Incision)

The trans-umbilical breast augmentation (TUBA) approach is a technique in which an incision is made along the navel (belly button). The surgical tools used will create a tunnel through the abdomen, allowing implants to pass through and be inserted under or over the muscle. Importantly, this approach may only be used to insert a saline-filled implant.

When determining the right incision for your breast augmentation, it is important to factor in breast implant placement. Implants can be placed over the chest muscle or over the pectoralis major muscle, which is a fan-shaped muscle located over or below the rib cage.

So which placement is right for you and how does this impact your decision in choosing the ideal breast augmentation incision for you?

Over vs. Under the Muscle

Both breast implant placements have several advantages and disadvantages of their own. The over the muscle placement, which is called the “subglandular” placement, is often recommended for bodybuilders or women with overdeveloped pectoral (chest) muscles that can sometimes affect the look of the implant when flexed.

Additionally, placing implants over the muscle offers the advantage of positioning the implants in a more natural location that is not as high on the chest as the submuscular position. Furthermore, some women feel that the over-the-muscle placement is more comfortable and the recovery is slightly easier.

However, many experienced plastic surgeons find there are more established benefits to placing breast implants under the muscle, which is called the “submuscular” placement.

One considerable advantage is that the muscle offers adequate implant coverage, which is important for a more natural appearance, especially in women with very little natural breast tissue. Without enough “padding” around them, implants can look too obvious on the chest and become vulnerable to rippling or cause the skin above the implant to look “wavy.”

Additionally, implants placed under the muscle undergo a little bit of pressure from the muscle, which gives the breast a natural sloped appearance featuring more fullness on the bottom of the implant.

So which implant placement is ideal and how does it impact the crucial decision of choosing the right breast augmentation incision for you? This depends on a couple of factors: the type of implant you want and the size of the implant, as well as your unique anatomy.

For instance, the inframammary incision (under the breast) allows for exceptional access and vision of the pocket. This helps achieve accurate and optimal placement of the implant. If you choose the submuscular placement, which is often a more extensive procedure than subglandular placement, the inframammary incision makes it simple for your experienced plastic surgeon to access the right area and place the implants in the proper position.

Choosing the Right Incision for Your Breast Augmentation Procedure

As you can see, there are many factors to consider when choosing the right incision for your breast augmentation procedure. Fortunately, you do not have to make this decision on your own!

If you are considering breast augmentation, it is best to consult with an experienced plastic surgeon in your area and discuss your options. A distinguished plastic surgeon, such as Dr. George Sanders, will go over all the options available to you and help you understand the advantages and disadvantages of each decision that goes into having a successful breast enhancement procedure.

Have further questions about choosing the ideal breast augmentation incision? Find a specialist in your area or get in touch with our office today.

Dr. George Sanders and his team are proud to serve clients throughout the Los Angeles and San Fernando Valley areas. We are here to answer any questions you may have about breast augmentation or any other aesthetic procedures!