Ready for a new you with your new facelift in LA? Dr. Sanders uses the most advanced techniques to help facelift patients erase the signs of aging, including deep lines and wrinkles, and improve the appearance of jowls and wrinkled neck.

How Can a Facelift Help You?
What Patients Are Saying About Us
Facelift Procedures
Good Candidates for Facelift
Before and After Photos
The “Natural” Facelift
Skin Resurfacing at the Time of the Facial Lift
How Much Does a Facelift Cost?
Facelift FAQ
Recovering from Facelift Surgery
Complementary Surgeries 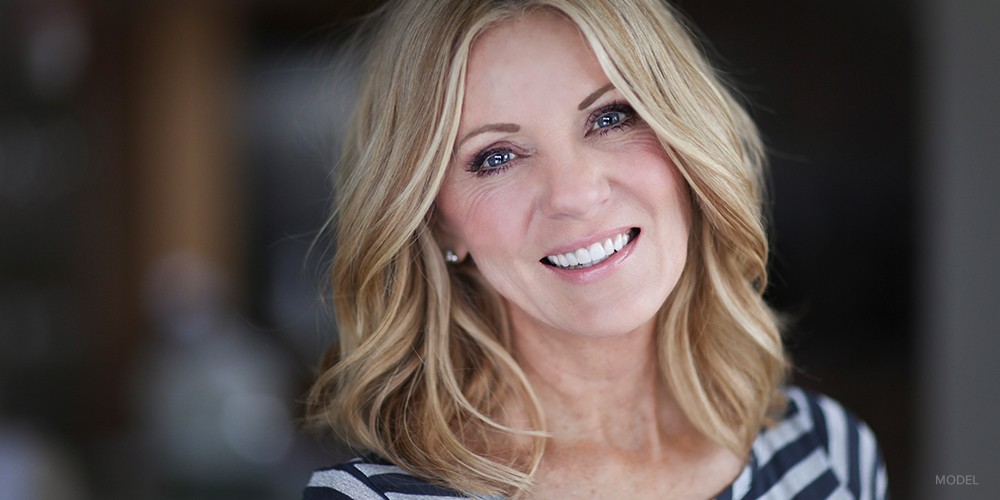 Dr. Sanders is a talented Los Angeles cosmetic surgeon who has helped numerous facelift patients achieve more youthful and refreshed appearances. In the paragraphs below he describes the facelift procedure and how he focuses on providing beautiful and natural results.

How Can a Facelift Help You?

A facelift provides a way to refresh your appearance and regain a youthful countenance, all with results that appear completely natural. Dr. Sanders and his team perform facelifts for men and women who feel as though their features are out of proportion and need to be brought into greater harmony. A facelift is also an excellent option for those who have lost some skin elasticity due simply to time, resulting in loose jowls, wrinkles, or fine lines. Through a facelift, Dr. Sanders’ patients can reverse some of the visible signs of age and once again look like younger versions of themselves.

What Patients Are Saying About Us

Come and see why Dr. Sanders has a 5-star Google rating from his ecstatic patients!

The size and location of the surgical incisions, as well as certain other details of the procedure, vary based on the type of facelift being performed:

In a full facelift procedure, an incision is made inside the front edge of the ear and extends under the sideburn and up into the temple area. Another incision is also made behind the ear, extending into the hair. A third incision is made beneath the chin. During the procedure, fat is removed and redistributed and the underlying layers of tissue and muscles of the face are lifted. The skin is then redraped over the area, and the excess skin is trimmed and sutured into place.

A full necklift procedure is the same as a full facelift, except that the incision does not extend up to the temple area, and addresses the jawline and neck areas only. This procedure is perfect for patients who wish to address only these areas and leave the cheeks alone.

In a cheeklift procedure, the cheek and jowl areas are lifted, but the incision does not extend into the hair behind the ear, nor is there an incision made beneath the chin, leaving the neck alone. Many younger patients find that this addresses their areas of concern. This procedure is ideal for patients who have sagging skin in the cheek and/or jowl area, but do not have excess skin or band lines on the neck.

A limited necklift addresses the jawline and neck, but is intended for those patients without a great deal of loose skin or muscle in the neck region. The skin of the front of the neck is not lifted to achieve access to the muscle. Instead, that muscle in the front of the neck is tightened from the side, which also allows for skin tightening. The advantage is that the limited necklift procedure can be done under local anesthesia, no drains are required and no overnight stay in a recovery center is necessary. One very popular type of limited necklift is called a MACS-Lift.

A limited, or mini-facelift combines a limited necklift with a cheeklift in that it improves the cheek and jawline area, with only a moderate change to the neck and no incision beneath the chin. This type of facelift is perfect for patients who want smoother, lifted skin around the cheek and jawline but whose neck requires minimal improvement. One popular type of mini-facelift is termed an Extended MACS-Lift.

A good candidate for facelift surgery generally has:

Before a facelift procedure, Dr. Sanders will take a brief medical history, ensuring that the patient does not have any illnesses or medical conditions that would impede their ability to heal properly. Ensuring patient safety is always the top priority, and facelifts are only recommended for those in good general physical health.

Have Loose Skin of the Face and Neck; Drooping Fat and Muscle:

With time, the skin tends to lose some of its elasticity, meaning it is not quite as tight as it may have been when you were younger. This can lead to some unwanted cosmetic effects, including loose folds of skin along the face and neck. For those who have this saggy or droopy appearance, a facelift may be the perfect solution.

Facelifts are generally recommended for those whose skin is healthy and clear overall. There are a number of reasons for this, but the main one is that skin disorders may actually increase the risk of visible scarring. Dr. Sanders will generally encourage patients to have underlying skin disorders addressed before moving forward with a facelift procedure.

The best facelift procedures offer substantial but also subtle results, not making it overly obvious to everyone you come into contact with that you had “work” done. However, to achieve a high level of satisfaction, patients must have the right expectations about their facelift results. Dr. Sanders will review these expectations with patients before their procedure.

Get a face and body that matches the ultimate vision of yourself.

Do you ever look in the mirror in disappointment, realizing that the face staring back at you does not match the image in your head? If you fall short of your own self-image, we invite you to consider aesthetic interventions, ranging from breast augmentation to facelifts to tummy tucks. Get the face and body you have always dreamed of, and step into a more youthful, more confident version of yourself. Request a virtual consultation with Dr. Sanders.
Request A Consultation

A facelift can bring harmony to your features, restore some of your skin’s tightness, and help you look like a younger version of yourself. For evidence of how great a difference a facelift can make, take just a moment to browse these before and after images, featuring some of Dr. Sanders’ actual patients. 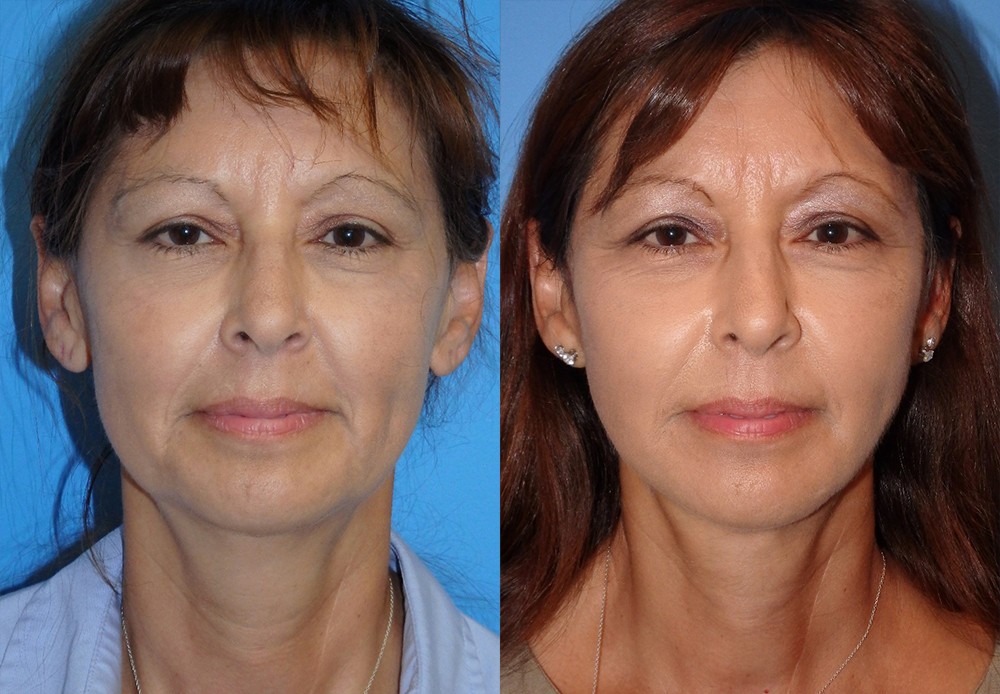 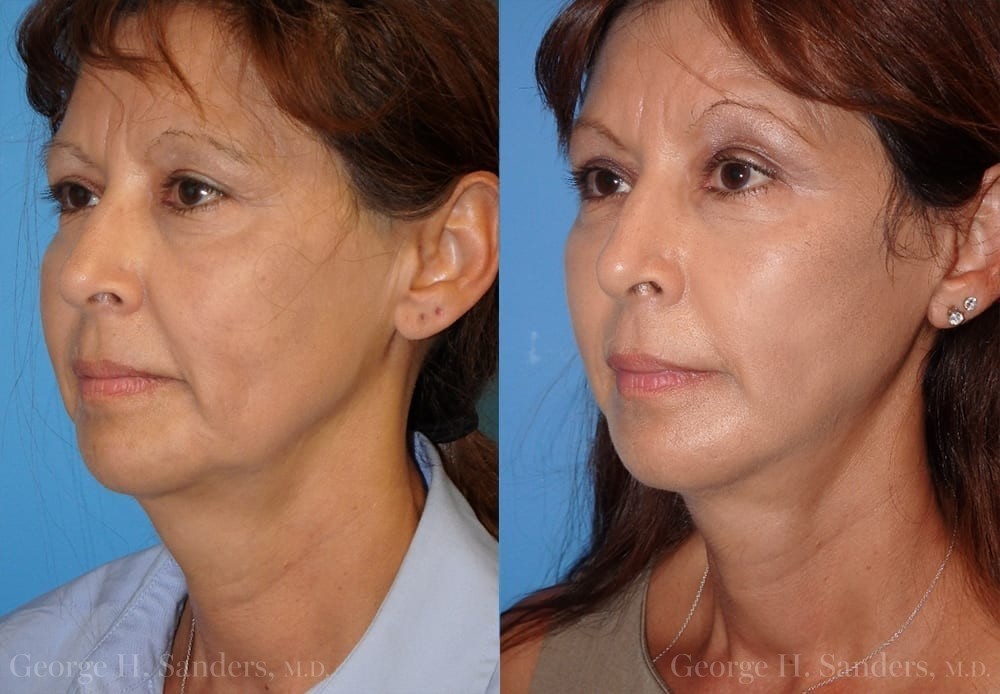 We all suffer from the consequences of age. But today, more women and men are discovering that by repositioning drooping fat, removing excess fat, tightening underlying muscles and re-draping skin, they can receive rejuvenating effects. For some, a facelift procedure may provide the solution. But how do you avoid a “plastic,” pulled look that lets the world know you’ve had a procedure? The skill and artistry of Dr. Sanders can enable patients to appear years younger and recapture their youth with an improvement that appears natural. To do this, he offers more than one type of facelift to his Los Angeles and Encino patients.

Video: Watch Dr. Sanders explain the factors that contribute to sagging skin and his approach to facelift that helps him provide patients with natural results.

Skin Resurfacing at the Time of the Facial Lift

Many patients have aging skin as well as drooping skin, muscle or fat. Laser skin resurfacing is frequently done at the same time as the facial lift with a laser or chemical peel. It can be done in small areas, such as the lips and eyelids, or over the entire face. After seven days, healing is usually completed to the point that makeup covers the treated area beautifully.

How Much Does a Facelift Cost?

The price of a facelift varies based on the needs and aesthetic desires of the patient. During your consultation with Dr. Sanders, he will provide you with a price estimate that is based on these individual factors. At that time, you may also wish to ask Dr. Sanders about the financing options that he offers, which create an affordable monthly payment method with low to zero interest. To schedule a consultation with Dr. Sanders for a facelift in LA and Encino, contact his office at (818) 981-3333.

Recovery time for a facelift surgery is usually 10-14 days, based on the type of facelift performed and your rate of healing. After a full facelift and full necklift procedure, you will generally have small drainage tubes behind each ear for a few days. After any type of facelift, there will be some bruising and swelling on the face, which should subside within the first two weeks. After 10-14 days, you may resume normal activities, including driving and light exercise. Most patients look quite normal by then.

Many patients choose to enhance their facelift with facial implants, fat injections or dermal fillers. Which should you choose?

Facelift surgery and facial implants solve two different aesthetic problems, though they may also be used together depending on the patient’s needs. Facelift surgery alone will lift drooping fat, remove excess fat and tighten loose muscle and loose skin. In some cases, nothing further is required. In other cases, the addition of implants/fat/injectables to the cheek or jawline will restore a more youthful look. This may be done with or without facelift surgery, depending on the patient’s needs and desires. In the consultation, these issues can be discussed in detail as they pertain to the case at hand.