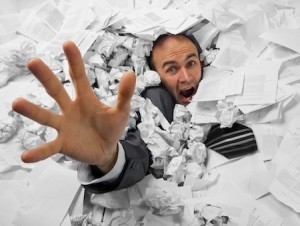 It’s a fact – many American physicians feel as though they are drowning in non-patient-related paperwork (NPRPW). According to a recent study reported in ASF Source by Drs. Steffie Woolhandler and David Himmelstein from the October edition of the International Journal of Health Services, the more time spent on such tasks leads to discontent with having chosen medicine as a career.

The study’s authors analyzed data from a 2008 physician survey, the most recent year for which data was available. All of the physicians from the survey practiced 20 hours or more per week. The survey results – the average doctor spends ~17% of their time in non-patient-related paperwork (NPRPW). If this was true in 2008, you can only imagine what it is now in 2014! This number does not include patient-related tasks such as writing chart notes, communicating with other doctors, or ordering labs. It does include matters dealing with billing, obtaining insurance approvals, financial and personnel management, and contract negotiation.

Some interesting facts from the study:

– Those physicians who use electronic medical records (EMR) spend more time on paperwork than those who don’t – 18% versus 15%! That’s 20% more time spent on paperwork if you have EMR!! So much for the claim that EMR reduce doctors’ paperwork!!!

– The more time spent on NPRPW, the less happy the physician and the more inclined they were to retire, work part-time, cut back on the number of hours worked, close their practice to new patients, or become concierge doctors. The net result = Fewer doctors to see patients. In this day of ObamaCare and  the resultant increase in the number of insured patients who require physicians, this spells a major problem!

– Psychiatrists spent the most time in NPRPW (20.3%), followed by internists/family practitioners (17.3%), and lastly by pediatricians (14.1%). Not surprisingly pediatricians were the most satisfied group of doctors.

– Doctors practicing in large groups of over 100 doctors spent more time doing NPRPW than any other group – 19.7%. Doctors in small groups spent only 16.3% – That’s 13% less time. The problem is that large medical groups are becoming the norm today. For instance, Kaiser Permanente reports record enrollment for 2014!

So how much time did doctors spend this year on NPRPW? The study quoted above relies on a survey from 2008, 6 years ago. For sure the amount of time hasn’t become less! A study done in 1995 gave a 13.5% figure. If it was 17% in 2008, it is probably closer to 20% today, given the proliferation of large medical groups and EMR.

Let me summarize the issue: More paperwork => less satisfied physicians => fewer in the business of taking on new patients => A problem!

How do we solve the problem? Your thoughts?